We were recently privileged to be handed a review of our Ealing location on Brian’s Coffee Spot blog. You can take a look at the review including gallery images here, we’ve included the content below….

Café Zee is a recent addition to Ealing’s coffee scene, joining such established players as Munson’s and the Electric Coffee Company. It arrived in July 2014, opening a few weeks before Artisan, which is just across the road on the busy New Broadway, a few minutes’ walk from the station.

From the street, the sumptuously-appointed Café Zee catches the eye and it looks even better inside. Inspired by the Art Deco cafés of Latin America, it really does have a beautifully-done interior, the sort of elegance I’m used to seeing in the likes of Notes on St Martin’s Lane or Paris’ Angelina. 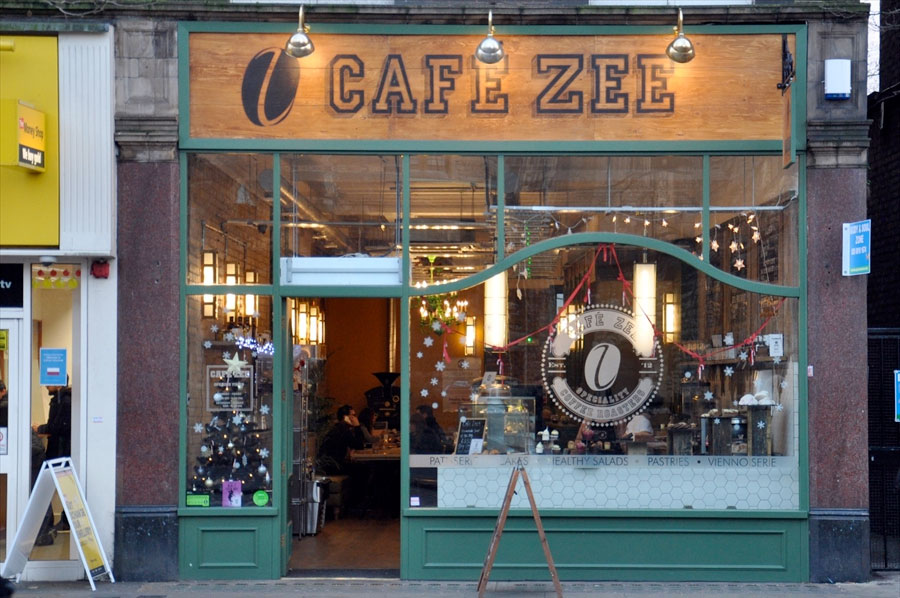 Café Zee on Ealing’s New Broadway has an elegant facade…

The other thing that catches the eye is the bold pronouncements of artisan coffee, roasted on the premises, which, I must admit, threw me a little. This kind of elegance is not something I normally associate with a café-cum-roaster (somewhere like Glasgow’s Papercup Coffee Company more readily springs to mind). However, head right to the back of the café and there you’ll find a modest 6kg Giesen roaster, surrounded by sacks of green beans.

However, there’s a lot more to Café Zee than mere elegance and freshly-roasted coffee, including a pretty decent menu and an exceptional cake selection!

Café Zee immediately attracts the eye, its elegance drawing you in. The cake-laden window display doesn’t hurt either. Inside, it’s long and thin, split into two distinct parts (three, if you count the basement). At the front, the counter dominates, running from the window for almost half the length of the store along the right-hand side. It’s a very long counter, by the way, which gives you some idea of how big Café Zee actually is.

Opposite the counter, against the left-hand wall, is a small bar with a few stools. The main seating, however, is beyond the counter. On the right, a flight of stairs leads tantalisingly downwards (more of which later), while on the left there’s a long, padded couch-seat with tables. Opposite this, a row of two-person tables runs alongside the stairs, beyond which, things widen out. There’s another set of tables on the right-hand side, while, in pride of place on the left, in its own little enclosure, is Café Zee’s 6kg Giesen roaster, surrounded by sacks of green beans.

Café Zee’s elegance is at its most obvious at the back, where the high ceilings and original, bare-brick walls combine beautifully with the reclaimed wooden panels, wooden floorboards and art deco fittings. These include amazing, long mirrors and matching light-fittings.

If all this seems too much, I’d say head downstairs, except that basement is hardly any less sumptuous. Considerably smaller than the upstairs, it’s nonetheless large and feels very spacious. All the seating is on the left-hand side, where tables are mixed with long, comfortable sofas and some amazing armchairs upholstered with old coffee sacks. It’s a surprisingly bright space, with plenty of natural light from a light-well at the back. In the evenings, it makes for a warm, cosy alternative.

When the roasting is done, the beans are poured out into the cooling pan…

I met up with co-owner Sebastian, who is in charge of the roasting, typically firing up the Giesen once a day, so you might be lucky and get to observe a roast (or, like me, arrange to arrive at just the right moment). Currently, Café Zee roasts its own espresso blend, a mix of Brazilian Peaberry and Costa Rican Caturra. However, there are plans to add a single-origin in the near future. Roasting in a café is always a particular challenge, but I was surprised by how little disruption the Giesen caused. Although there were a number of customers around, no-one actually seemed to notice that Sebastian was roasting!

I really liked the Café Zee blend. I tried it as a cortado (the house special) where I found its natural sweetness combined well with the milk, although I’d say that in volume, it was closer to a flat white. However, as an espresso, it really stood out, smooth and easy on the palette while at the same time surprisingly complex.

The other standout is the amazing array of cakes. I tried two, an almond Struffin, and a chocolate Cruffin. The former was similar to a Portuguese Bolo de Arroz, somewhere between a cake and sponge in consistency, with a rich almond flavour. I really liked it, but the Cruffin, a cross between a croissant and muffin, was even better. The pastry was incredibly rich, with a wonderful, chewy consistency, more like a panettone than a croissant, the chocolate chips adding unexpected bursts of sweetness.

See all our Trip Advisor reviews